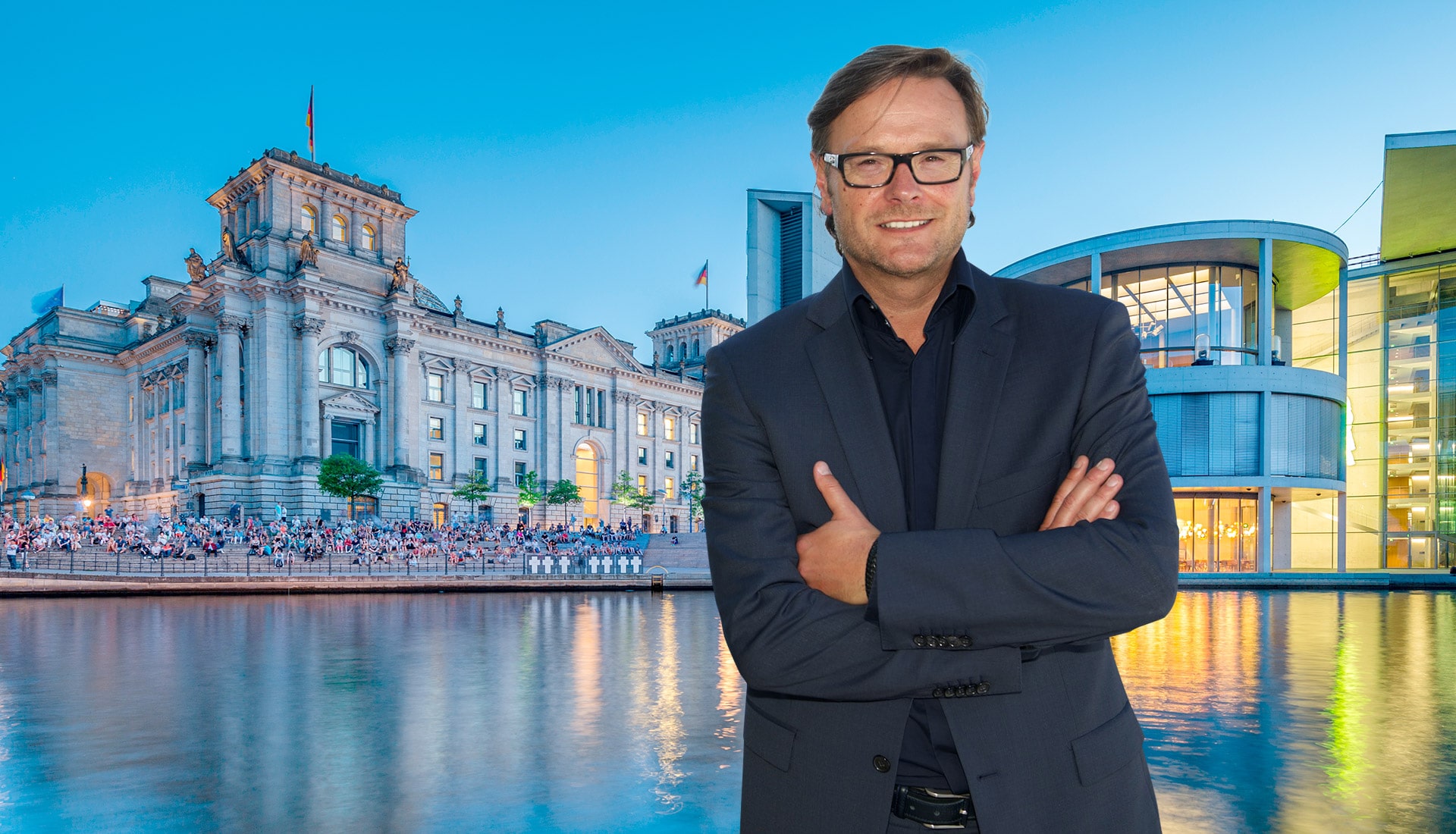 Political talk with know-how and sensitivity

Those who want to recognize interests and positions need a clear view, not propaganda, selected images or only personal emotions or perceived truths. Distinguishing talk between fake and fact requires a lot of background knowledge and experience.
As a host of my two talk formats, I see it as my task to separate the relevant from the superfluous – much like a curator as an expert in his field. Orientation is my aspiration for a serious political. That’s why I bring together groups from different worlds and discuss with them about the subject.

‘PFEIFFER FRAGT’ is the platform for background on the big topics – partnering with a variety of stakeholder groups and representing all aspects and positions from politics, economy and society. Aiming at building bridges to everyone who is not satisfied being just an object of discussion, but wanting to be an integral part in public decision making processes. The approach is straight and simple: illuminating complex issues with in-depth-discussions, experienced high-level panels – and the outspoken courage to differentiate opinions.
Committed to the subject of the matter – without politically correct and over-balanced panels, but with the respect for competence. On top of that: ‘PFEIFFER FRAGT is the talk in town and on location – reaching out to viewers in the cities, setting topics, bringing stakeholder groups together, discussing publicly and with everybody involved in the topic.

For a deeper understanding and a better judgement.

The dialogue-intensive four-or six-eye format: For outgoing executive-personal on CEO-level from businesses, politics and society. The talk ‘BUTTER BEI DIE FISCHE’ opens up the windows for in-depth-analysis – but also for spontaneous improvisation and the personal sides behind the job. With a lot of personality and room for emotion. The stage to be for subjectivity, personal interest in the experiences of the guests and an honest respect for the challenges of life – in combination with a charming tone and a real sense of humanity.

GreenDeal instead of CoronaBonds: Is green hydrogen the new EU economic miracle?

How can Europe´s economy be rebuilt in a future-proof way after the Corona pandemic? Is the Brussels’ “Green Deal” the solution to reconcile economy and energy transition in the restructuring of society? Will green hydrogen be the key industry to make the new EU economic miracle happen?

These key questions were addressed by moderator Jürgen Pfeiffer’s guests in the new edition of ‘PFEIFFER FRAGT` , live from the studio in Saarbrücken Castle. It was the first “hybrid talk” within the new series ‘Energiewende.Richtig.Machen’, which took place without an audience on location, but was simultaneously streamed live nationwide via an alliance of eight platform partners. Host Jürgen Pfeiffer was joined in the discussion among others by Saarland’s Minister President Anke Rehlinger, the EU Commission’s coordinator for hydrogen, Dr. Christian Weinberger, Saarland’s FDP state chairman Oliver Luksic, and the head of Siemens Energy’s Brussels office, Benedikt Herges. The director of the Hamburg Institute for the World Economy, Prof. Dr. Henning Vöpel, joined the panel from Hamburg by video.

You can find the entire broadcast here. 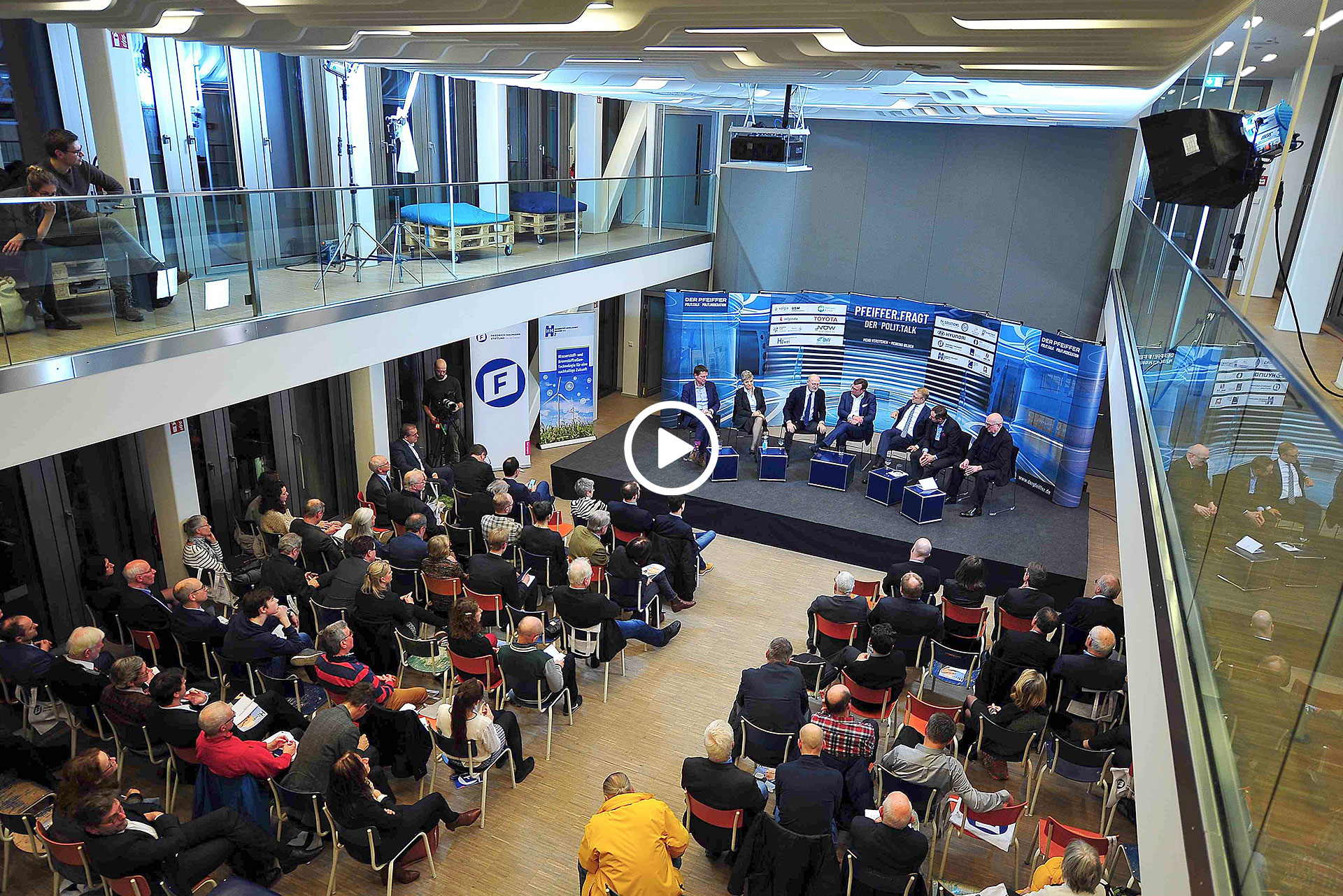 “To achieve the climate targets, we need to decarbonize all sectors of economy,” says Hamburg’s non-partisan Senator for Economic Affairs Michael Westhagemann. To succeed, Germany’s second-largest metropolis, the free and hanseatic city of Hamburg, needs an integrated energy transition that horizontally links all sectors between the two rivers Elbe and Alster, from industry to transportation, from heat to electricity. “H2 hub Hamburg: Will the Hanseatic city become a hydrogen metropolis?” was subsequently the logic focus of attention of PFEIFFER FRAGT’s January talk. More than 250 guests on location followed a passionate, entertaining and stimulating debate in the crowded SQUARE HSBA Innovation Hub. Top guests of this edition, which was also reported on by numerous media, were Hamburg’s Senator for Economic Affairs Michael Hagemann, the CEO of Siemens’ hydrogen division Gabriele Schmiedel as well as the chairman of Hamburg’s FDP parliamentary group Michael Kruse. Experts from the region, such as the deputy chairman of the Hamburg Hydrogen Society, Dr. Oliver Weinmann, and the managing director of hySOLUTIONS, Heinrich Klingenberg, complemented the debate, as did European industry association Hydrogen Europe CEO, Jorgo Chatzimarkakis.

Last exit hydrogen – how electromobile does the transport transition have to be?

830,000 people are working in the German automotive industry – nearly half of them in Baden-Württemberg – but the sector is heading for a real crisis: reason enough to discuss the topic of logistics and mobility in regional context and with a view to causes such as CO2 emissions and the energy transition. “Last exit hydrogen – how electromobile does the transport transition have to be?” was therefore the headline of the latest edition, which was recorded in front of an audience of around 260 people in Stuttgart’s ‘Haus der Wirtschaft’. Guests of the high-profile panel included the Minister for the Environment of the state of Baden-Württemberg, Franz Untersteller, the state leader of the Liberal party and deputy chairman of the FDP parliamentary group in the national parliament, Michael Theurer, as well as representatives of national and international associations such as the CEO of the European industry association Hydrogen Europe, Jorgo Chatzimarkakis and the Managing Director of the H2 infrastructure consortium H2 Mobility, Nikolas Iwan. Inside expertise came from high-ranking guests from industry such as the Head of the Hydrogen Technology Center at AUDI, Michael Hofmann and the Head of New Business Areas and Battery at ElringKlinger, Armin Diez. 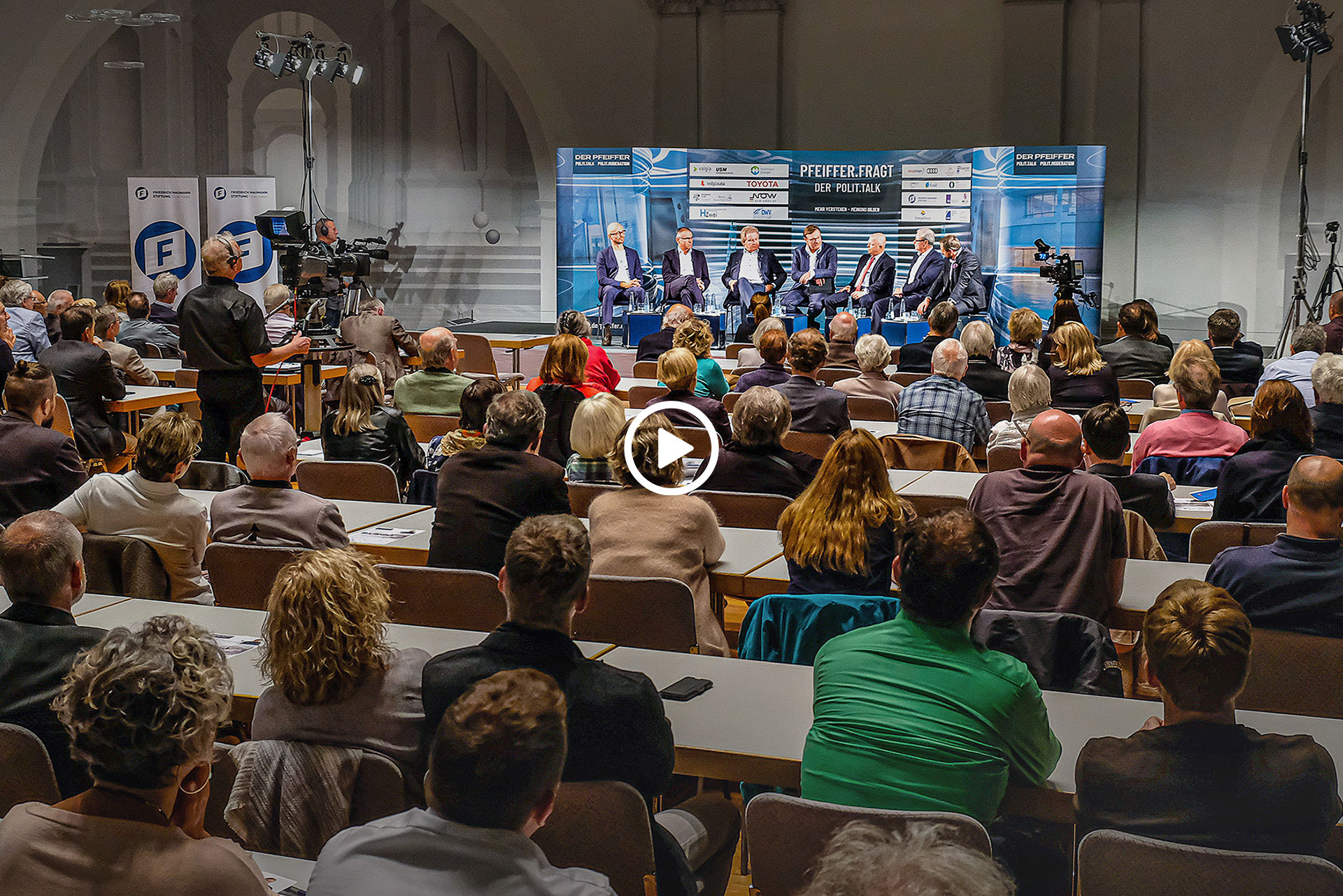 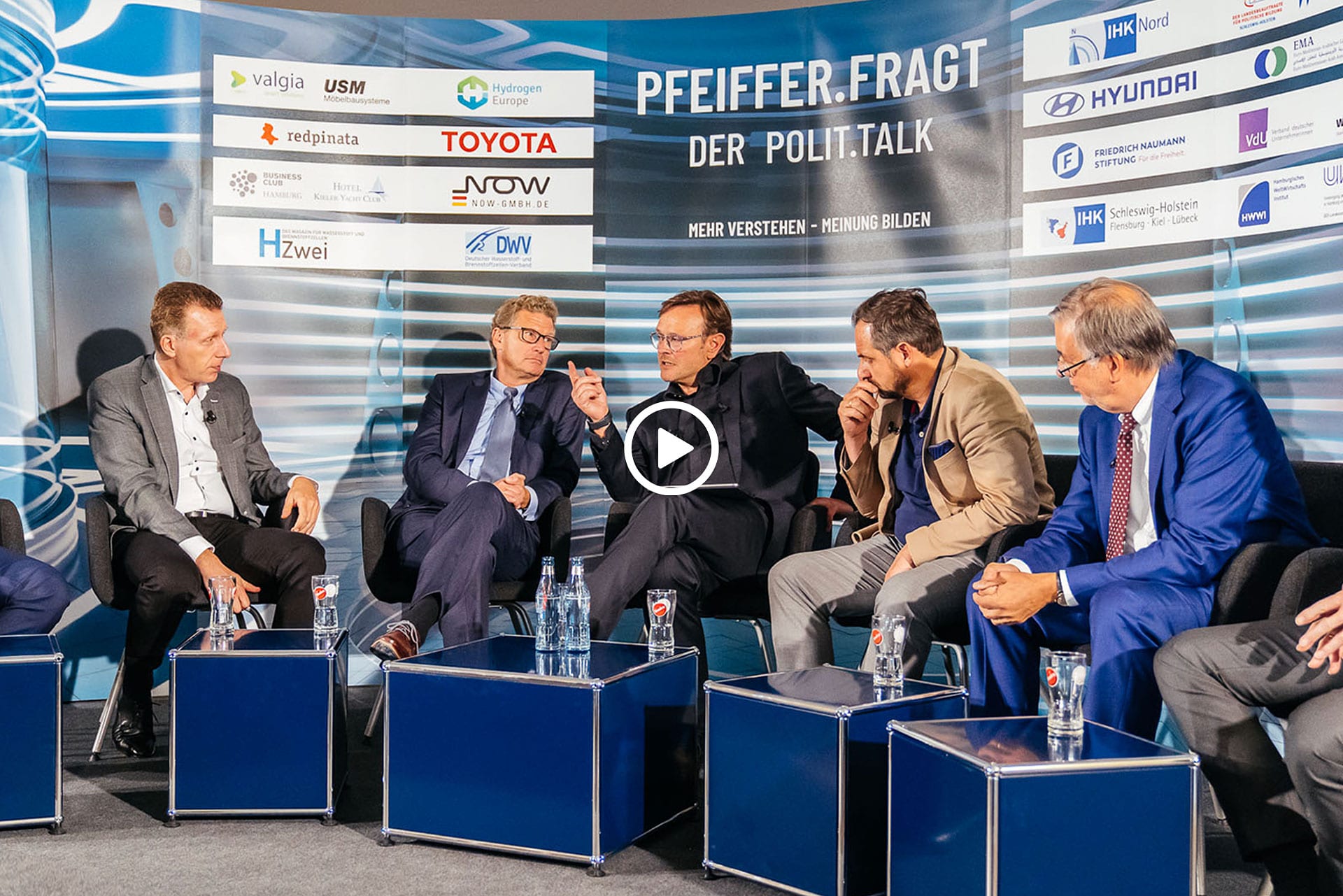 Hydrogen as a Wonder Weapon – how will Northern Germany manage the Energy transition?

Climate change is the topic of the day. But the energy transition is not getting off the ground. Neither in Europe nor in Germany, and so far also not in any of the sectors such as industry or transport, which are extremely important for the success of the whole process. PFEIFFER FRAGT is therefore launching the nationwide information series “Energiewende.Richtig.Machen.” and is reaching out to the people: Discussing with experts. Explaining the interdependencies. Focussing on facts not fakes. Reaching out to every private and public stakeholder group from science to media. In short, we show what needs to be done and what each individual can do in the future to improve the situation. Debating with Jurgen Pfeiffer at the first edition of the show in Kiel: The Minister of Economics of Schleswig-Holstein, Bernd Buchholz, the President of the North German Business Association Uli Wachholtz, as well as the CEOs of the German and European hydrogen industry associations from Berlin´s DWV, Werner Diwald and Brussel´s Hydrogen Europe, Jorgo Chatzimarkakis.

Freedom of opinion instead of human dignity – how do we protect civil liberties?

This was the headline of the one-hour November edition of ‘Butter bei die Fische’, the intensive eye-to-eye- format of PFEIFFER FRAGT. The VIP-guest at the recording at Hamburg’s Amerikazentrum, which took place in cooperation with the broadcasting chain The Radio Group: Sabine Leutheusser-Schnarrenberger, the long-time FDP Federal Minister of Justice, who is a well-known and widely respected advocate of civil rights and freedom of speech. Afterwards, the approximately 100 guests on location had the chance to have their personal copy of Schnarrenbergers new book “Angst essen Freiheit auf” (Fear Eats Up Freedom) signed – her personal plea for fundamental rights on the occasion of the 70th anniversary of the German Grundgesetz. 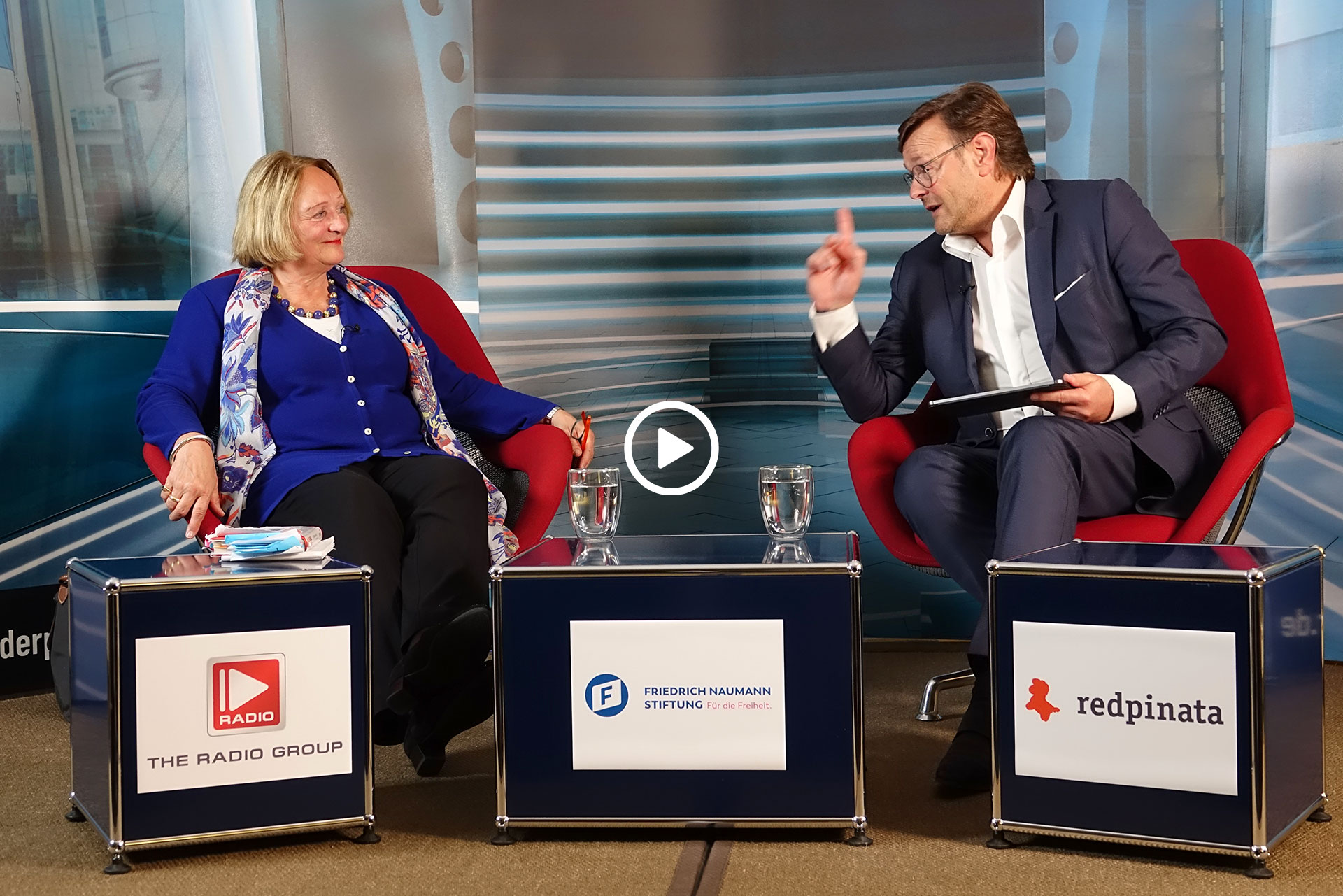 “PFEIFFER FRAGT – the Polit.Talk” during the European Week: “Ego trip or group tour – does the new east west conflict divide Europe?” Jürgen Pfeiffer was discussing this hot political topic in mid-May as part of the European Week on a very exclusive basis: This time, the new episode of his Polit.Talk took place right in the heart of the state parliament in Mecklenburg-Western Pomerania. A very suitable place for the 175 spectators in the fully packed plenary hall – and the place to be for the top-class panel of policy experts on site.
Discussing with Jurgen Pfeiffer in the Schwerin castle: The new Eastern European Commissioner of the Federal Government, Dirk Wiese, the Parliamentary Director of the Greens in the Bundestag, Dr. Franziska Brantner, the Minister of the Interior and Europe of the State of MV, Lorenz Caffier, the parliamentary group leader of the FDP in the European Parliament, Nadja Hirsch, the former Austrian EU Commissioner Franz Fischler, and the former EU and security advisor to Chancellor Helmut Kohl, Joachim Bitterlich.

Ice Age or Handshake – What brings Putin to his senses?

The annexation of Crimea is an outspoken violation of international law and has sparked international protest- but people continue to die in eastern Ukraine up to this day, despite of the agreed ceasefire. Economic sanctions have not yet persuaded the government in Moscow to relent, nor have talks. What alternatives remain? That’s what the prominent guests around the deputy party leaders of the German Social Democratic Party (SPD) and the German Liberal Party (FDP), Ralf Stegner and Wolfgang Kubicki, will try to answer in this political round-up with Jürgen Pfeiffer. 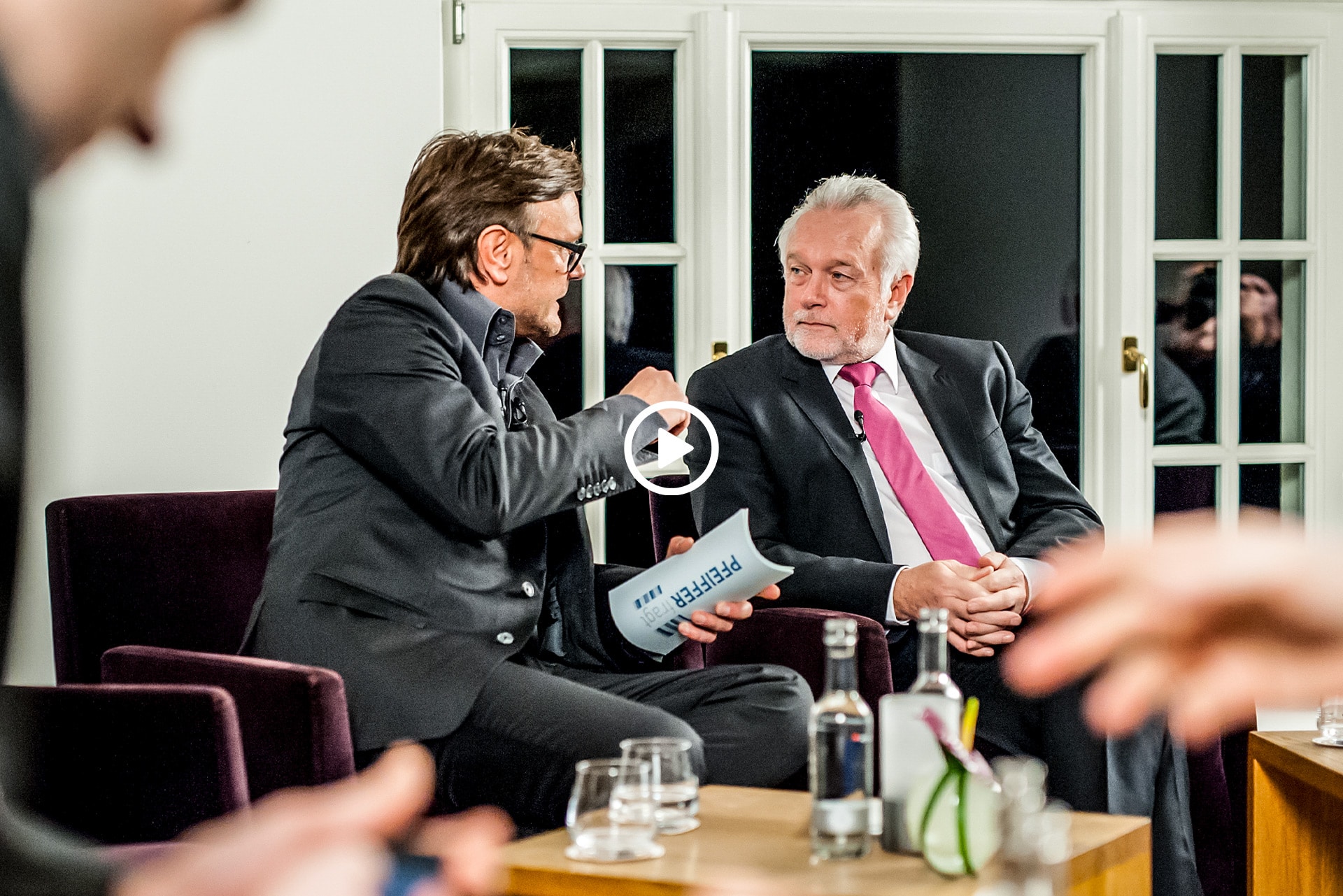 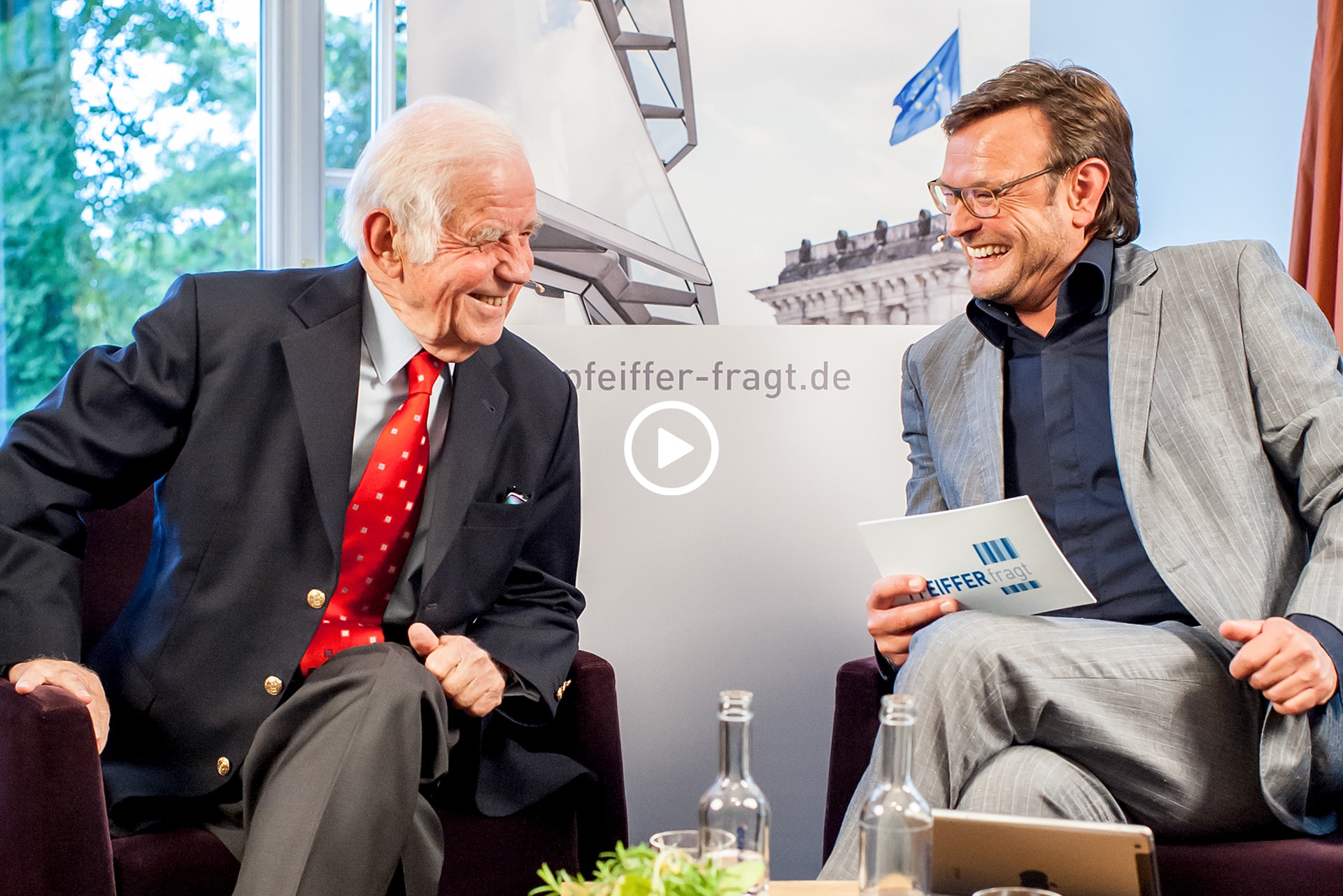 Blockaderepublik Deutschland – How fit for the future are we really?

Is the grand coalition pursuing backward-looking economic policies? Are pension packages worth billions of Euros the right answer to demographic challenges of the future? Is the chancellor’s strategy of “politics on sight” working? This edition of PFEIFFER FRAGT provides some perhaps uncomfortable answers from one of the country’s most distinguished thought leaders: Long-time Minister President of the Free State of Saxony, Prof. Dr. Kurt Biedenkopf.

Reboot or sell-out: How can TTIP still be saved?

Global trade relations without tariffs can only be achieved through appropriate global agreements. These are complex and the subject of extremely emotional debates, depending on their content and positions. This was also the case with the free trade agreement with the USA, widely known as TTIP. But anyone who makes an effort to analyze the facts and discuss them in a differentiated manner could also find quite astonishing overlaps: Between critical voices like Anja Hajduk, parliamentary director of B’90/ Die Grünen in the German Bundestag, or clear TTIP supporters such as Christoph Dürr, FDP parliamentary group leader in the state parliament of Lower Saxony. 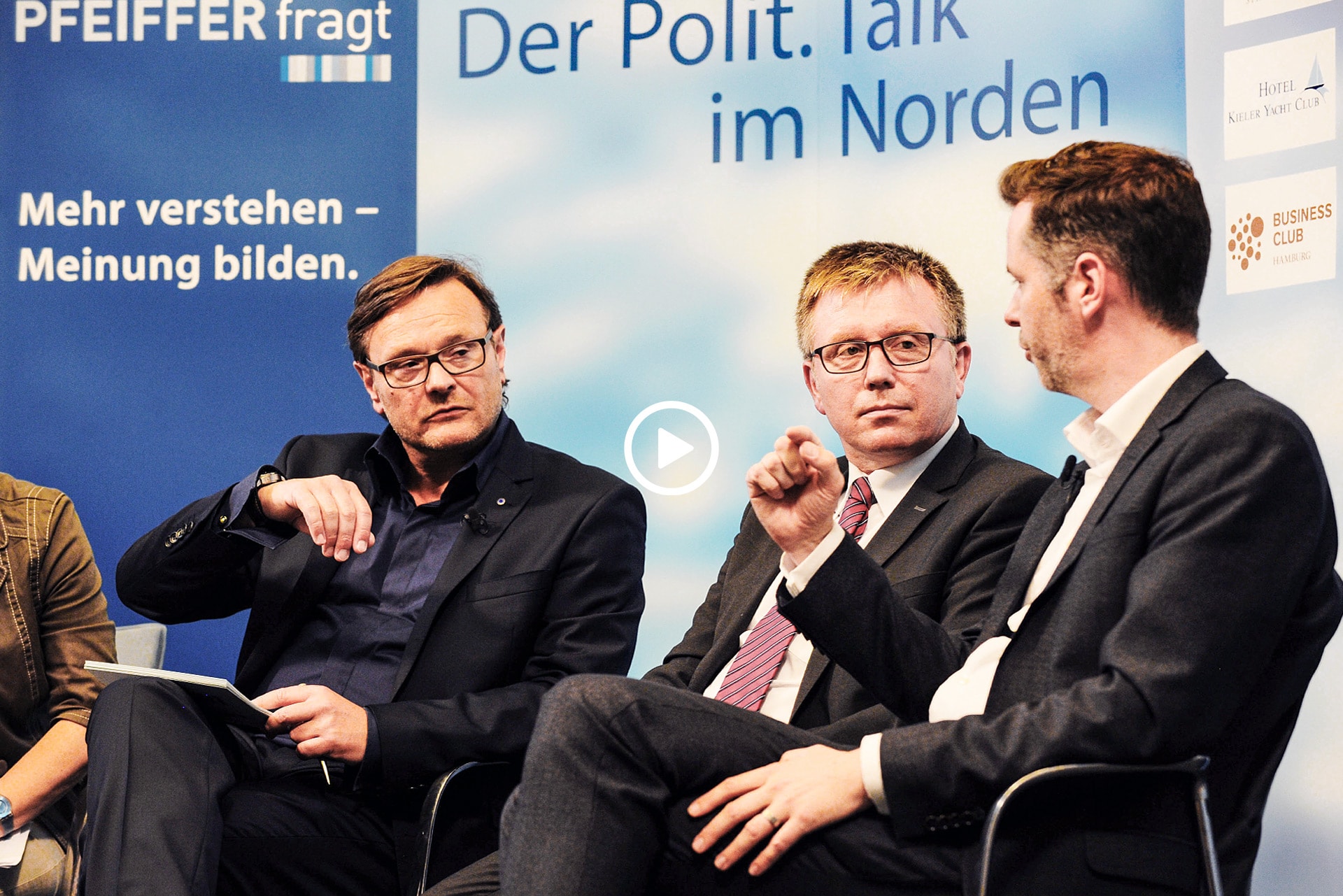 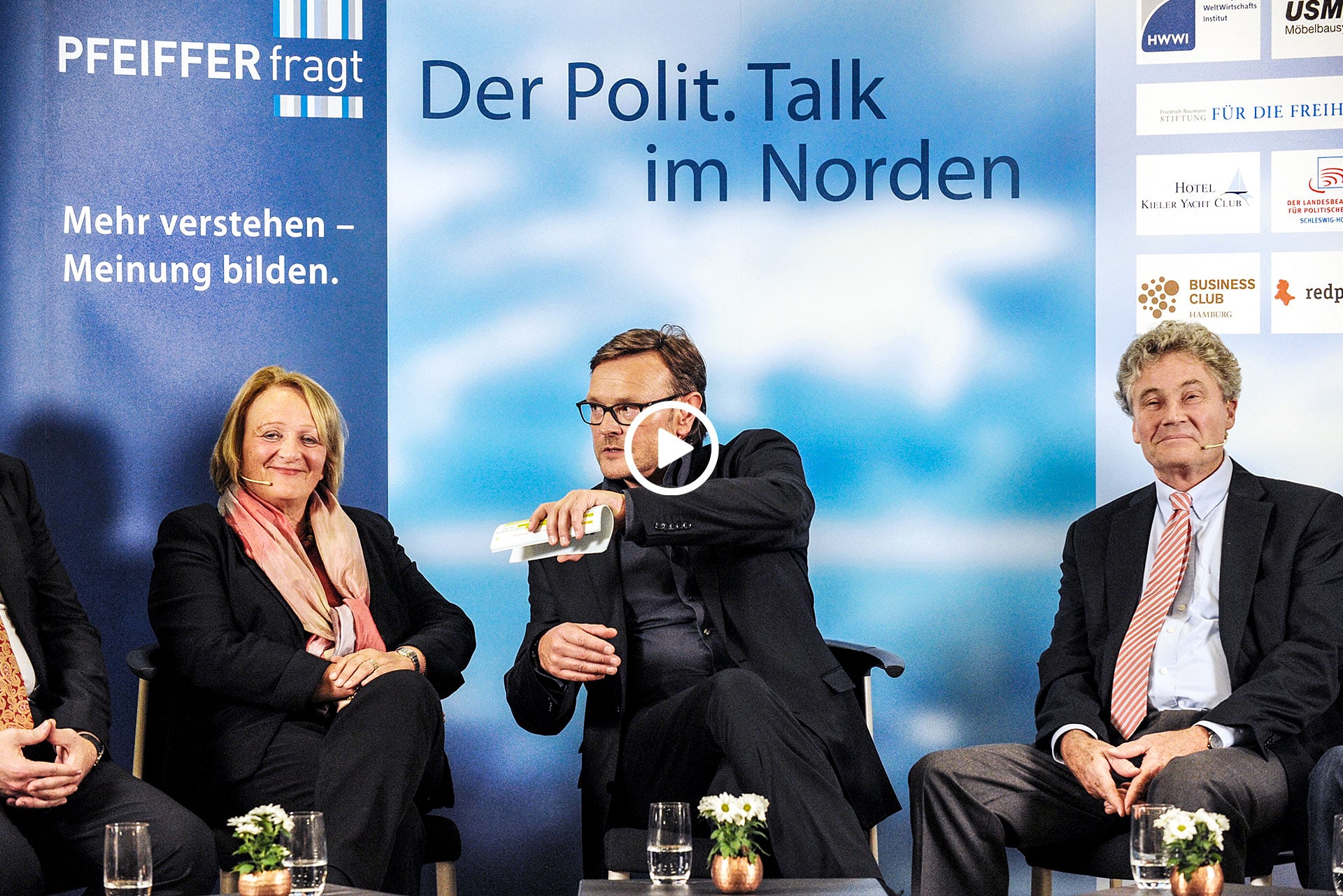 Data collection instead of privacy – Is Germany becoming a spy-state?

Telecommunication providers already have to store the connection data of their customers for 6 weeks, even for conversations of professionals like lawyers, doctors or journalists, even if they are not allowed to be used. The new episode of PFEIFFER FRAGT is raising the question, if we need data retention at all, when every terrorist is able to use prepaid cell phones and encrypted chat programs for secret communiation? The pro´s and con´s are discussed in thought-provoking statements and emotionally engaged answers among former Federal Minister of Justice, Sabine Leutheusser-Schnarrenberger (FDP), the long-serving President of the Hamburg branch of the Federal Office for the Protection of the Constitution (BfV), Manfred Murck as well as experts from law- enforcement and science.

“Restructuring Europe – EU at any price?”

The uncertain future of a European Union with 27 members remaining, provides an ideal breeding ground for Euroskeptics, new nationalists and populist parties. Their actions can no longer be ignored in the European capitals between Berlin, Rome and Budapest. Is the continent drifting even further apart and wouldn´t it be the right moment to reorganize the EU and make it more efficient? What prize are the citizens ready to pay for a united Europe? Jürgen Pfeiffer is getting in-depth- answers from Prof. Günter Verheugen, long-time Vice President of the EU Commission and Commissioner for Enterprise and Industry. 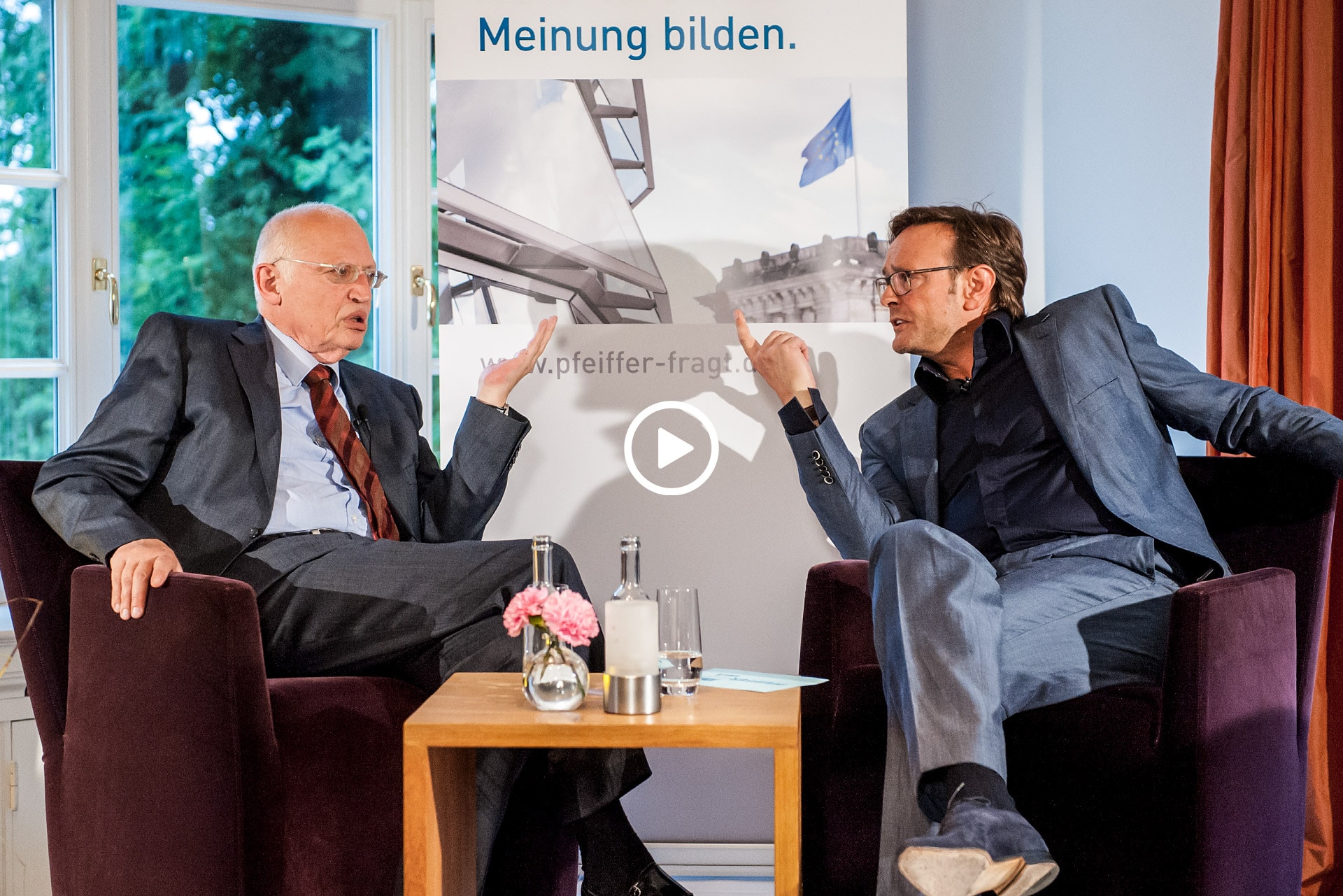